A beautiful, private and secluded coastline inaccessible to the public by land, Kipu Kai and Lawai Kai offer some of Kauai's best snorkeling. A series of movies were filmed in these areas including The Descendents, Hook and Raiders of the Lost Ark. 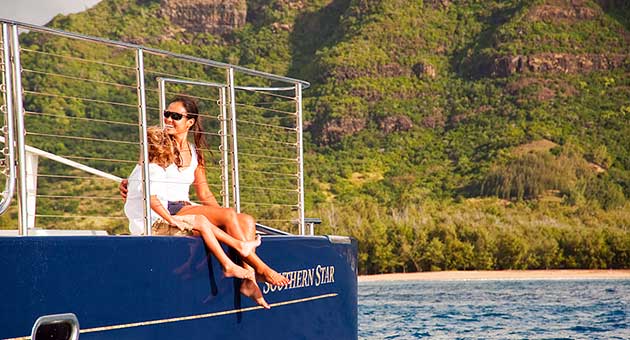 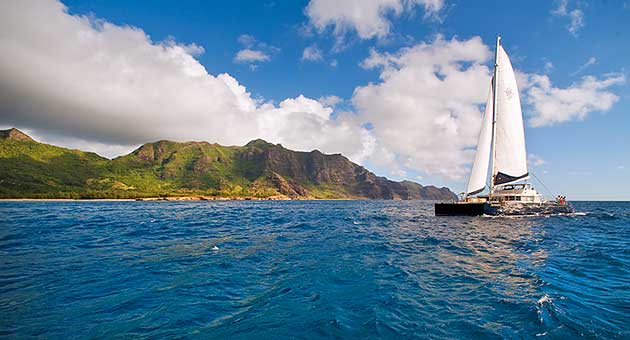 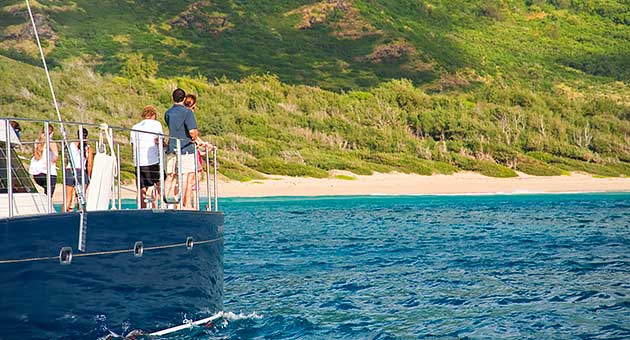 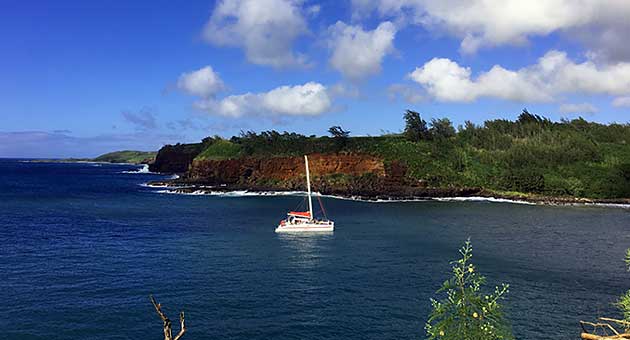 "One of the best but hardest to get to spots to snorkel On a recent Captain Andy's snorkel tour the seas were too high up on the Napali coast so we went south to Kipu Kai. What a treat. The water is crystal clear and...the number and variety of fish is amazing...We've been all over the island and this spot is amazing."
– OregonRainGuy,

Occasionally, rough surf along Na Pali Coast prevents our tours from going there — but it doesn’t stop the fun! If we can't head to Na Pali, we divert our adventures along Kauai’s beautiful and historic Kipu Kai and Lawai Kai coastlines.

Note: During whale watching season (Dec – Apr) our Kipu Kai and Lawai Kai trips focus heavily on whale watching. This is a huge perk to those passengers interested in seeing humpback whales up close!

Sites Along The Way

Legend tells us of a family of mo’o, large gigantic supernatural lizards, two sisters and one brother who swam to these islands from Tahiti. The brother mo’o landed at the beach of Lawai Kai. The people living along this south shore of Kaua’i found this gigantic reptile to be quite friendly and called him “Lehu”. Swimming along the coastline, he was fascinated by the geysers of seawater at the place called Puhi Kai o Lawa’i, known today at Spouting Horn. Here he found a long narrow lava tube that opened into the ocean. When an ocean swell rushed into it, water shot out from a small aperture on top. Lehu crawled into this lava tube to investigate this peculiar natural wonder. Unfortunately, he got wedged inside and hasn’t been able to escape. The Hawaiians of long ago tried to free him, but the lava was too hard to break. While at Spouting Horn, the hissing of Lehu can be heard with each ocean swell that sends a fountain of water into the air.

The Lawai Kai Bay backs up to the Allerton Gardens and has a breathtaking view of the south. Queen Emma started the gardens in 1871 with many starts brought into the bay on ships. After the Queen’s death in 1886, Elizabeth McBryde bought the entire property for $50,000. She planted sugar cane in the upper lands and leased the lower lands to Chinese farmers to grow taro and rice. In 1935 the property was sold to Robert Allerton and he began to expand the gardens.

The promontory in Lawai Kai Bay is known as Pu’u o Kiloi’a which translates into English as meaning “Hill of Fish-Spotter”. The top of this basalt hill was formerly used as a lookout for the fish spotter of Lawai Kai. When schools of fish would come into the bay, the fish spotter would stand on top of this hill and use hand signals or flags to direct the fishermen in the canoes so that they could encircle the fish with their large long nets.

Maha’ulepu and The Gillin House

Remote, rugged, historical, and spectacular, Maha`ulepu is the last accessible, undeveloped coastline on the south shore of Kauai. It is also home to the famous Gillin House. Elbert Gillin, a civil engineer with the Koloa Sugar Plantation, fell in love with the isolated Maha'ulepu Valley and its untouched beaches while surveying the area. In 1946, he acquired a ¾ acre parcel on the ocean front and began trucking a surplus officer's quarters from World War II to the site. The original beach house was later expanded, and the Gillins lived in the charming home for over 50 years. After Hurricane Iniki claimed the cottage in 1992, the family replaced it with a house reminiscent in design, but more reflective of modern living.

The land area known as Kipu was originally awarded to Princess Victoria Kamamalu in 1853. In 1886, Mary Sophia Rice acquired Kipu Kai to build a small beach residence. Several generations later in 1950, John T. Waterhouse completed the purchase of Kipu Kai from various members of the Rice Family. This privately owned area of 1,096 acres has been operated as a cattle ranch for many years. A little known fact is that the private and remote residence on Kipu Kai is where Jackie Onassis and her children were taken to stay after her husband was fatally shot.

Legend tells about a demigod named Kamapua’a who could change himself into different supernatural body forms. He first arrived on Kaua’i on the shore of Kipu Kai in the form a large fish called Humuhumunukunukuapua’a. This fish has a snout similar to a pig and also makes a grunting noise like a pig. As soon as Kamapua’a landed at Kipuiki Point, he changed himself into a large boar and began to root in the sand in search of fresh water to quench his thirst. At low tide, fresh water can still be found today at Kipuiki Point.

During that night, Kamapua’a raided and ate all of the sweet potatoes and sugarcane being cultivated by the villagers. When the villagers awoke early in the morning they found their crops eaten and fields ravaged. Soon they found the tracks of the large boar and followed them with their dogs until they came upon Kamapua’a, fast asleep. They quickly tied his feet together with strong cordage and carried him to the village, where they prepared an imu (underground oven). This boar was so huge it took twenty men to carry him. When the stones in the imu glowed red, the boar was then prepared to be cooked. Suddenly, Kamapua’a stretched himself, breaking the ropes and changed into a man. He walked away from this precarious predicament. The village men were so astonished that they did not dare to follow him. Kamapua’a continued to explore this vicinity of Kipu Kai and when he became thirsty he would turn himself into a boar to root in the earth to find spring water. Several of these springs associated with Kamapua’a can still be found in Kipu Kai. 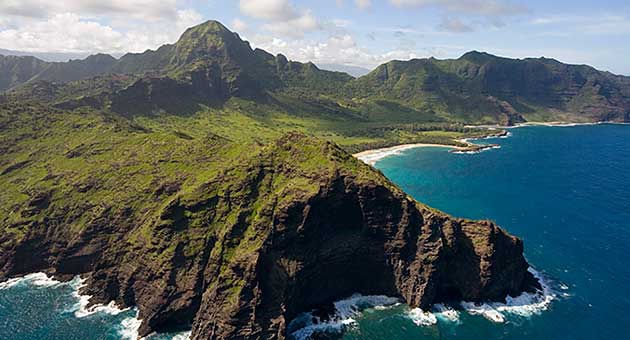 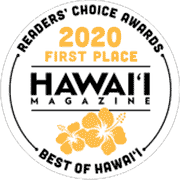 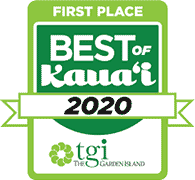 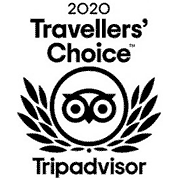